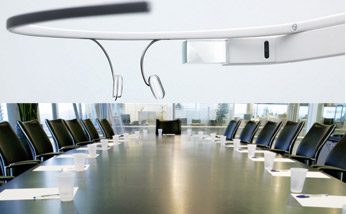 Google Glass engineer Mike LeBeau loves his job working on the voice interface for Glass so much that he decided to show off—in a new YouTube video he created with several friends—some of the cool things Glass can do.

LeBeau shared the video on his Google+ page June 10 to exhibit some of the many uses for voice search using Glass.

“One thing that makes Glass awesome is that you can just long press on the touch-pad any time and speak to ask Google a question,” LeBeau wrote in his post. “It’s a super-fast way to search, which, it turns out, is pretty magical. Amanda Rosenberg and I decided to test out a bunch of cool searches and thought you guys would like ’em too—check it out.”

So far, Glass devices are only in the hands of a small but growing group of developers who attended the 2012 Google I/O Developers Conference and were offered first dibs on what was then the newly announced eyewear-mounted computers.

LeBeau, who builds voice interface features for Glass, and his friend, Rosenberg, joined with another unidentified friend to ask Glass for help using voice commands in the video.

That question and answer from Google Voice Search was particularly intriguing because Glass recognized the context of the question and knew the answer related to the San Francisco Giants baseball team, even though the question didn’t mention baseball.

Also featured in the 20 questions on the video were requests for “pictures of Richard Branson in drag” (several were displayed, oh, my); a definition of the word phlebotomy; and a request for “who sang that song where the guy goes ‘how bizarre?'” (answer: OMC).

Other questions and answers included minimum height requirement information for the amusement rides at Space Mountain, the Italian translation for the word “peacock,” a recommendation for a good Thai restaurant near Google’s Mountain View, Calif., headquarters, and the real birth name of the pop singer Prince.

With each example, the speed, accuracy and cool factor of Glass was very evident.

Google Glass isn’t yet ready for the general public, but sales of the devices are now expected to begin sometime later this year, according to a recent eWEEK report. That’s at least months earlier than the 2014 retail debut the company had been targeting since last year, a source inside Google told eWEEK.

Each Google Glass device includes adjustable nose pads and a high-resolution display that Google said is the equivalent of a 25-inch high-definition screen from 8 feet away. The glasses also feature a built-in camera that takes 5-megapixel photos and video at 720p. Audio is delivered to wearers through their bones, using bone-conduction transducers that were revealed in past reports.

Earlier in June, Google modified its developer policies to ban adult-oriented apps from being offered through the Glass project. The move came just days before a vendor had announced what appeared to be the first such app.

The concept of Glass has been a hit so far for Google, but some critics argue that they continue to be worried about the privacy implications surrounding the use of the device, which is an eyewear-mounted computer that features a still camera, a video cam and other real-time recording features.

In addition to Google banning adult-oriented apps, on May 31 the company announced that it will not allow facial-recognition apps on Glass until strong privacy measures can be put in place to protect users and the public from misuse. Several privacy experts told eWEEK that the move to ban facial-recognition apps for now was probably the right call.