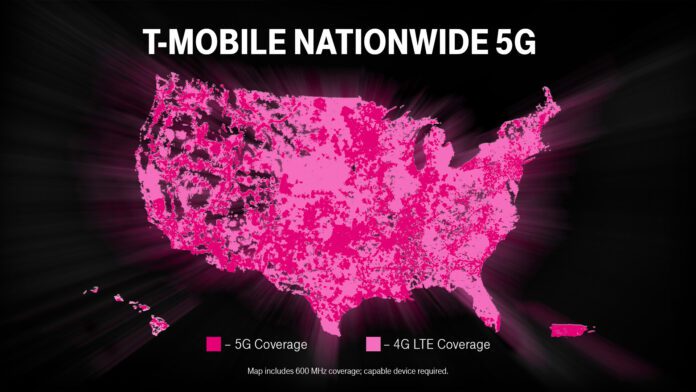 Beginning Dec. 2, T-Mobile began lighting up its nationwide 5G network. The company said that its 5G network will reach more than 200 million people in over 5,000 cities and towns in the United States. According to the company, the initial launch will cover over 1 million square miles.

The company was able to switch on so much coverage at once because it had already built out its 600MHz LTE coverage, which is now operational. When the company put LTE in those new cells, it included a 5G capability that only needed a software update to switch on the 5G part of the cell. T-Mobile has now done that.

This puts T-Mobile ahead of the other U.S. carriers in launching a 5G network. Verizon and AT&T are implementing millimeter-wave 5G networks in select urban areas, and both companies are working their way through U.S. cities, lighting them up as sites become available. For example, Verizon has recently published its 5G coverage map for the Washington, D.C., metro area, and according to that map, 5G coverage is available mainly in the business district and in tourist areas. Notably, Verizon also covers Amazon’s HQ2.

The difference between Verizon and its 18 cities and T-Mobile is that T-Mobile’s map includes the entire United States. Washington, D.C., appears to be covered in its entirety, as does the San Francisco Bay area and the Seattle area. Interestingly, Puerto Rico is solidly covered with 5G.

AT&T Slowly Rolling Out Its Own 5G Network

For its part, AT&T is available in parts of 21 cities, but it’s not available to consumers.

What’s also notable about T-Mobile’s coverage map is that the company superimposed the 5G coverage on the existing 4G LTE coverage map. This is important because T-Mobile is using what’s called non-standalone 5G. This means that 5G phones will use it when they can get it but also will change to 4G LTE when they can’t.

“As customers move in and out of 5G coverage, the coverage will be seamless,” said Mark McDiarmid, T-Mobile’s SVP of radio network engineering and development. “The phones will automatically see that coverage.”

While T-Mobile will continue to support its existing millimeter-wave installations, the bulk of the effort right now is in the lower bands.

Millimeter waves are radiation in the extremely high frequency (EHF) band, sometimes abbreviated MMW or mmW or mmWave. Radio waves in this band have wavelengths from 10 to one millimeter, so it is also called the millimeter band. Millimeter-length electromagnetic waves were first investigated by Bengali Indian physicist Jagadish Chandra Bose during 1894-1896, when he reached up to 60GHz in his experiments.

“600[MHz] covers wide areas and penetrates buildings very well,” McDiarmid said. “We think a multi-band strategy is the right strategy.” He said that if the Sprint acquisition goes through, then its mid-band frequencies will provide comprehensive coverage.

“We have three bands that are complementary,” he said. “You get the benefits of each of the bands, and it requires no refarming.” He said that by doing its 5G implementation this way, T-Mobile doesn’t need to displace any customers.

“The plan started three years ago, and it’s 4G and 5G simultaneously in all bands,” McDiarmid explained. “The way we’re built this network is that they get access to the 4G they really enjoy, and we add the 5G.”

T-Mobile is also announcing the concurrent availability of two 5G phones; one is a OnePlus 7T Pro 5G McLaren, and the other is a Samsung Galaxy Note 10+ 5G. Both phones will work on T-Mobile’s 5G and LTE frequencies as well as on Sprint’s mid-band.

However, these phones won’t support T-Mobile’s millimeter wave signals. McDiarmid said the company will have 15 5G phones next year. Those phones will be available for T-Mobile and Metro, its prepaid service.

According to the T-Mobile announcement, its 5G will be offered at the same cost as its existing service. Likewise, the new 5G phones appear to be priced similarly to existing LTE phones. To some extent, this may be part of T-Mobile’s effort to show that it’s not raising prices after the Sprint merger, if it happens. That merger has been approved by the government, with only a civil court case standing in the way of the deal closing. One issue in that court case is that T-Mobile might raise prices once the merger happens.

T-Mobile Is in the Lead–for Now

At this point, T-Mobile has a significant leg up in the 5G race. While its 5G coverage is indeed nationwide, it’s by no means complete. But it’s far more complete than the competition. And while 600MHz 5G won’t provide the blinding speeds and massive bandwidth that will come with millimeter-wave 5G, right now that’s a long way off for everyone.

What will come with T-Mobile’s 5G are things that the millimeter-wave version can’t deliver. You get broad geographical coverage, building penetration and predictable propagation. You will still get the efficiency and low latency that 5G promises. And because of T-Mobile’s mid-band plans (assuming the Sprint merger happens), there will be 5G coverage to meet a variety of needs, not just the dense urban coverage in some parts of some cities.

So while it may not be the 5G that’s mostly science fiction at this point, assuming it’s done right, you’ll get 5G that’s useful and available.