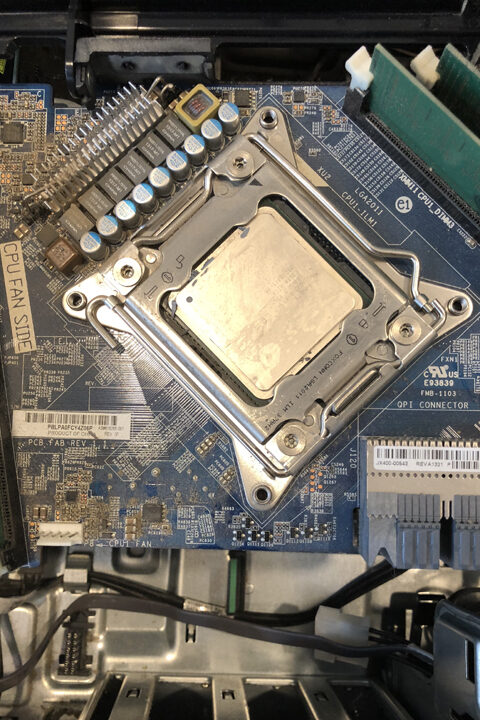 A few days ago, I laid out the considerations involving a processor swap on a professional workstation. The idea is that you can improve the performance of your workstation by replacing the processor that’s in the machine now with one that’s faster. This can work if your workstation can accept a faster processor, but as I mentioned previously, it also needs to make economic sense.

You also need to make sure you have the skills to perform the processor swap, including knowing how to remove and install the necessary cooling ductwork, riser boards and heat sinks, and that you know how to make sure you’re grounded so that you don’t fry your new processor. And of course, you want to make sure everything is organized in advance, since you can’t stop partway through and look something up on the computer.

First, make sure your workstation can accept a faster processor. You need to confirm what processor is installed in your computer already. You find this out by opening the Windows Device Manager, then clicking on the line that says “Processors,” which will show you a list of each core of your processor, along with the processor type. When you see it, which in the case of this old Z620 was a pair of Intel Xeon E-2620 CPUs, write this number down.

Be Sure to Know Which New Processors Your Machine Will Support

Next, check your documentation to see what processors your computer can support. In the case of this workstation, there were several–the fastest for a dual-processor configuration being an Intel Xeon E-2690. This processor is about 50 percent faster than the original one and has eight cores instead of six. This means an upgrade would make a noticeable difference.

The second step is go gather the tools and materials you’ll need. Before you do anything else, you’ll need to install a program that can report on the operating temperature of your processors. I used Speccy, which comes from ccleaner and provides a wealth of detailed information about your workstation, including the processor temperature reported in real time. Once you’ve found the software you need, write down the operating temperature of each processor.

Once you’ve recorded the details about your existing processor, turn off the computer and unplug it. Unplug any peripherals. Now, remove the cover and place the computer on a table with good lighting so you can work.

Before you do anything else, you need to make sure that you have the replacement processors, a screwdriver (even for tool-free computers), some heat sink thermal compound, some lint-free cloths and some 70 percent isopropyl alcohol. You can get the cloths and alcohol together by getting some prep pads at your local pharmacy.

Now it’s time to get access to the motherboard. In the HP Z620, this means unlocking and lifting out the riser that holds the second processor and then unlocking and removing a cooling duct and fan assembly. There in the middle you should see a heat sink, probably with a fan attached. It’ll be held in place by four screws. Before you do anything else, take a photo so you’ll know how it goes back.

Be Careful About Static Electricity Causing a Problem

Now, lower the levers until they click into place. Your new processor is installed, but you still have more to do.

Put a small glob of the thermal compound in the center of the processor. It should be about 3/8 of an inch across. Then carefully align the heat sink over the screw holes, and place it directly on top of the processor. Tighten the screws until you feel them stop, but do not tighten them any more than that. Plug in the power cord for the fan.

Putting It All Back Together

Once you’ve finished, replace the cooling ducts, and then close the cover. At this point you should start the computer and first make sure it runs, and then check to make sure the processors are running at the proper temperature.

Note that you may need to tell your computer’s BIOS that you’ve upgraded the processor (the F10 key during startup does this on the HP). You may also need to register some of your applications again the first time you run them since they may detect the new processors and assume that you’re using a new computer.

If your temperature readings are a lot higher than they were before you replaced the processors, you may need to shut things down and try again with the thermal compound. In the upgrade for this workstation, the new processors actually ran a few degrees cooler, staying around 54 degrees Celsius. They shouldn’t go above 70 Celsius in normal use.

When that’s done, you’ve finished making your old workstation about as fast as you can make it. If that’s not fast enough, then it’s time to budget for new computers next year. But at least your existing machine will be somewhat more productive, and the upgrade for the processors only takes about an hour, meaning that the overall cost including the parts and labor is far cheaper than a new computer.