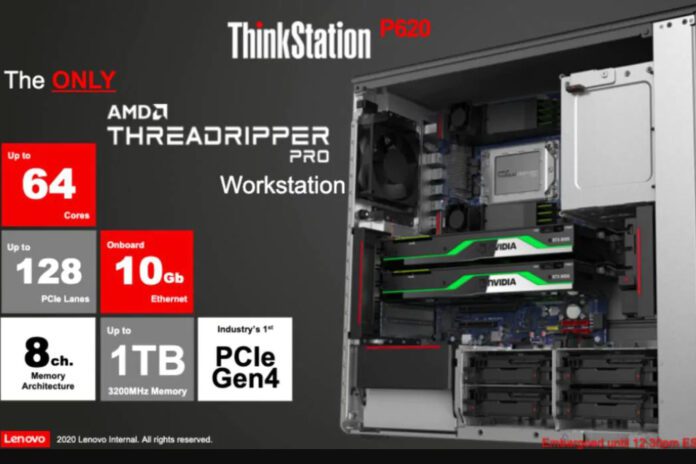 To say I’m a fan of the AMD Threadripper product would be an understatement. I live for moments when vendors push the envelope and do something that is both awesome and incredibly risky.

When you are AMD and have primarily lived in the shadow of a much larger and more powerful vendor, it becomes easy to create low-cost alternatives to that competitor’s offerings because that is the safe path. But you don’t get ahead by playing it safe and Threadripper, AMD’s over the top CPU initially targeted at gaming was anything but a safe path.

What struck me as odd, though, was the initial positioning at a gaming product given gaming was often tied more closely to the GPU than the CPU. Also, workstation applications still, in many cases, stressed existing CPU architectures suggesting a workstation based on this product would be a far more interesting offering, but until now, the only workstations using this part were from little-known vendors.

Well, Lenovo just changed that with the launch of their P620, the first AMD Ryzen Threadripper Workstation, oh, and it uses a special Pro version of the Threadripper processor explicitly designed for workstation workloads. This workstation move is enormous for both AMD and Lenovo, and for the lucky engineers, animators, architects and artists that get a hold of this thing, it will be like angels sang.

Up until now, the most cores you could get in a commercial workstation were 56, and to get there you needed two processors. Two processor solutions tend to be wicked expensive because you have to cool both of them and because these were top-of-the-line processors, the result was, well, wicked expensive. You also have potential performance bottlenecks because the motherboard has to handle data transport between the two processors, where if all the cores are in one processor, the higher-speed interconnect between the cores can then handle the load.

This result isn’t to suggest that this workstation is a GPU slouch either, because it will support up to two NVIDIA Quadro RTX 8000 cards or up to four AMD RTX 8000 cards. Moving the data around is fourth-generation PCIe, and this is the first workstation to use that new standard. The fourth generation of PCIe is up to twice as fast as the third generation was and combined, this level of performance should mean this workstation is the fastest in the market for applications that can make full use of all this power.

As you would expect from a workstation configuration, you can get a ton of memory and storage. With up to 1TB of memory and 20TB of storage, this thing has massive capacity. This capacity is because often, those that work on workstations, have to deal with huge files and data sets.

But, right now, Threadripper pretty much stands alone as the most potent workstation processor in the segment and, really, after that, everything else is just gravy. Well, almost everything else, this is a version of the processor built to Lenovo’s specs, and they created a custom heatsink for this beast as well.

Unlike any other form of the personal computer, workstations are almost always specified by the people who use them. Their work product, whether that be an engineering drawing, CAD/CAM, animation, or an advanced model, is tied closely to the capability of the workstation. The more powerful the workstation, the faster and better the result because these people work against deadlines, and when pressed, they can make mistakes. And since their speed and quality go to the bottom line, their creators tend to get whatever hardware they need to meet the stated goals of the related project.

When you come up with a workstation that is significantly faster than anything else in the market, assuming the applications can make use of that power (which, sadly, isn’t always true), these creators will chase the resulting product. The Lenovo P620 with AMD’s Threadripper Pro has the potential to be that highly desired product, and it wouldn’t exist if both AMD and Lenovo didn’t make a huge bet.

Sometimes putting the pedal to the metal pays off, and I think this will be one of those times. I think I just heard the engineering angels sing.