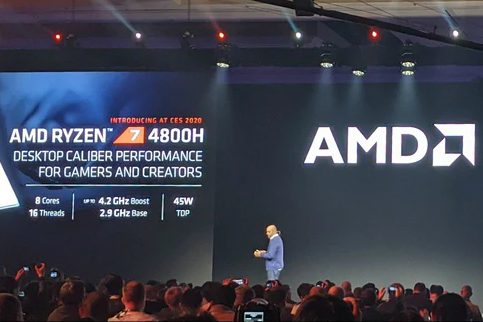 AMD had one of the first CES keynotes this year, and of the processor vendors AMD is arguably the most powerful in the high-performance consumer space with dominance in gaming systems (PlayStation and Xbox) and a strong position in desktop PCs, particularly those used for gaming.

What makes AMD interesting and a sharp contrast with its competition is focus. At this show, it is focusing on gamers and creators, those who imagine and build the experiences we see in games and graphics-intensive movies and TV shows.

Their one big expansion area is laptops. This is an area where AMD has struggled in the past, but in 2020, they appear to have a winning combination. Here’s a look at AMD highlights from CES 2020.

One of the advantages AMD showcased in 2019 was its move to a 7nm process, which, in theory, should provide a performance-per-watt advantage critical to the laptop market. That advantage was showcased with their Ryzen 4000 launch at CES and what could be the highest performing laptop solution in the segment. For instance, the Ryzen 7 mobile processor on spec ranges from a modest 4% advantage for single-threaded performance, but when it comes to multi-threaded performance, it screams with up to a 90% performance advantage. Multi-threaded loads tend to come from applications that creators use and for gamers.

The showcased the Lenovo Yoga Slim 7 with workstation performance in a thin form factor. (As a side note, Lenovo has been presented at every major showcase I’ve been to at CES this year; that firm is pushing the envelope).

On the graphics side, AMD opened focused on gaming. The reason why is because this segment generates $35.7B and that e-sports is growing at more than $1 billion a year. They pointed out again that they were in both next-generation consoles from Sony and Microsoft and were in Apple’s high-end desktop system as well (used by creators). Part of AMD’s effort is its FreeSync licensing to monitor makers. They provide this technology to monitor makers for free. There are two new FreeSync levels, a Premium-level and a Premium Pro level providing additional enhancements.

One of their big differentiators is RDNA, which is core to their high-performance graphics card. At the show, they announced what may be the ultimate 1080P gaming card called the RX5600XT. For e-sports games, this card, according to AMD, outperforms their competition by between 10% and 20%. This card is a nice step up from the 5500 series and falls below the 5700. This new high-performance card is a very attractive $279. They also announced that both the 5600 and 5700 would be coming to notebooks providing a reasonably priced high-performance option for those that want high performance on the road.

Azor is a new hire into AMD, and he is a gaming system legend, having been the gaming lead at Dell and Alien Ware for decades. Frank shared his vision as an ex-OEM on the next generation of gaming PCs. He announced the Ryzen 7 4800H processor, which promises desktop-class performance in a laptop. Eight cores (16 threads) and high clock speeds in a processor that can be used in a notebook form factor. Typically, there is a 26% performance, and it requires nearly twice the electrical power.

The 4800H has slightly more performance than a desktop processor but with the same power requirements of a high-performance mobile part. He showcased the Asus ROG Notebook that will use this new processor, and not only did it have that powerful new processor but an LED display on the cover of the notebook that you could customize, so those who see the notebook know that it is something new and special. Suddenly I have lust in my heart for a high-performance notebook.

Coupled with this new mobile announcement is something AMD calls Smartshift. This dynamically shifts performance to where it is needed, providing higher performance in the same thermal envelope. They then showcased the Dell G5 SE, which will be priced at $799 that will have both this new processor and the Radeon 5600M they showcased earlier. It may be one of the best performance values in 2020, and it is due in the first half of the year.

This may be my favorite processor ever. There is something to be said for companies that step out and just for the heck of it build something amazing. Threadripper was just that kind of product, and AMD showed pictures of the people that lined up to buy it because, in terms of performance per dollar, there was nothing that came even close.

CEO Lisa Su announced AMD’s third-generation Threadripper with a whopping 64 cores. It isn’t a cheap date at just short of $4,000, but it outperforms dual-processor systems, which a processor cost about $20,000. It has a 30% performance advantage of their competition and one-fifth the cost.

There is something to say about focus, and Su and her team have sure shown the benefits of that. This was a solid set announcement. Frank Azor brings an impressive vision to gaming and across-the-board competitive offering, ranging from mobile and graphics to my personal favorite Threadripper 3. I’m also impressed that Lenovo has been featured in every event so far as a technology leader. In any case, AMD is stepping it up for 2020, showcasing competition and focus. These are both good things.