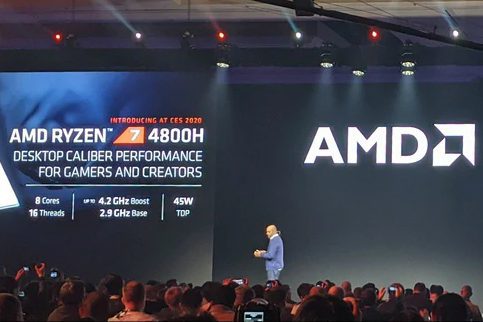 Back when I was working on my first degree in merchandising–yes I have a degree in merchandising–one of the stories told to emphasize good marketing was of the young boy and the chocolate rabbit. It goes like this: The boy goes into a chocolate store and orders a male chocolate bunny. The store owner looks down at the child and says: “Why do you care? It is only a tiny bit more chocolate,” to which the child replies, “Yes, but it is a tiny bit MORE chocolate.”

The lesson is that people like a little something extra, and along those same lines, the AMD Ryzen XT processors are based on that same concept. Priced the same as regular Ryzen processors but providing just that little extra edge of performance, they provide that male chocolate bunny experience by giving a little more.

Let’s talk about why this is important to both the market and the user this week.

Back in the 1990s, desktop and laptop PCs were pretty ugly, yet there was a considerable amount of excitement that surrounded every launch. Intel had its Bunny People; we had lots of PC-based TV shows; we even had a PC radio show on satellite radio (our audience was mostly truckers for some reason). There was a ton of excitement surrounding every new technology launch.

Then we had portable music players, which evolved into smartphones, and the marketing dollars and efforts shifted to that market. It is my belief that had Microsoft and Intel–instead of trying to compete on smartphones and music players–had invested in demand-generation for PCs, that market would have remained healthy and they wouldn’t have lost so much money on projects like Zune, the Microsoft Phone and Intel’s failed smartphone effort.

This sequence of events brings up another story I got from my CEO grandfather. It was about William Wrigley, the founder of Wrigley gum, who was, in his time, the wealthiest man in America. He was riding on a train with a young aspiring college graduate. That graduate asked: “Given that you are the wealthiest man in America and your company is No. 1 in its segment, why do you waste money on marketing?” Wrigley responded: “We are in a train traveling 60 miles an hour, why don’t we stop shoveling coal into the engine?”

The lesson was that if you want a market to keep going, you have to continue to fuel it, and marketing, done right, is what helps ensure demand for a product or segment.

And you might recall that you haven’t had Wrigley gum in some time and you also may recall you haven’t seen a Wrigley gum commercial in some time, either. The tech market is sadly not the only market that has forgotten the importance of demand generation marketing.

AMD has been doing impressively well of late, and it doesn’t have Microsoft’s or Intel’s once-huge marketing budgets. But what it can do is create products like the Ryzen 9 3900XT, Ryzen 7 3800XT, and Ryzen 5 3600XT processors that carry this demand load by providing that little extra chocolate–or in this case, performance.

Their launches have that little extra excitement, the products that little extra performance, and the result is they get a nice sales pop as a result. This is because, just like that little boy, people do want (when given a choice) that little bit extra. Features like AMD GameCasher with providing on-chip gaming acceleration, Precision Boost 2–which provides an extra kick on demand–and One-Click Overclocking for those that might, if they bought a car, appreciate the coming rocket boosters on a Tesla (yes that car is in development) are attracted to these capabilities.

Putting excitement back into this segment helps raise all boats in that it showcases what creativity can do to a brand and sales volume and might drive marketing investment back into the segment.

AMD has been doing very well of late, and part of the reason is that they are doing things like Threadripper and the XT offerings that return excitement to the segment. These are over-the-top offerings that provide the performance gamers, and creators desperately need to compete or complete that big project on time and under budget. But even more significant, they return a bit of the focus to marketing and demand generation to a segment that desperately needs it.

And that is something I think we can all appreciate while we are waiting for our first ride in that insane Tesla sports car.