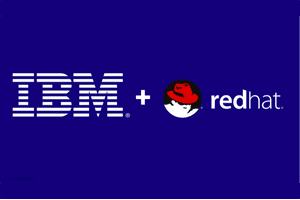 In IBM’s recent announcement closing its $34 billion acquisition of Red Hat, the company said the deal:

Do these points make sense given the two companies’ history and relative strengths? If so, are there any challenges or barriers they face in pursuing these goals? Finally, what can customers and partners expect moving forward?

IBM and Red Hat share considerable history. Founded in the early 1990s, Red Hat went public in August 1999, around the same time that IBM became the first Tier 1 vendor to publicly support Linux. Since then, IBM made considerable investments in Linux and scores of other open-source projects and processes. Those efforts found their way into the solutions and services the company provided to tens of thousands of global customers. That’s particularly true for IBM’s Z enterprise platform, where half of IBM’s Z customers run Linux.

It’s worth noting that Red Hat’s success is closely linked to IBM’s efforts. The company’s Red Hat Enterprise Linux (RHEL) and its other solutions have long been offered by IBM (which has always agnostically supported whatever Linux distribution its customers preferred). Over time, RHEL and other Red Hat solutions became clear favorites among IBM’s and other vendors’ enterprise clients, and helped spark fundamental shifts in other computing areas, including supercomputing and high-performance computing (HPC).

While Linux began as a data center outlier, its position as an enterprise operating system (OS) is now thoroughly mature and stable. Recent IDC market research reports that among data center OS vendors, Microsoft Windows Server variants cover around half (49.6%) of the market, Red Hat owns about a third (32.7%) and other, mostly Linux, OSes account for the remaining 17.7%.

In other words, Red Hat’s solid market leadership in enterprise Linux makes it of obvious interest to IBM. In addition, if Red Hat was intent on putting itself up for sale, an acquisition would be the only way IBM could ensure that its own and its enterprise system customers’ Linux needs would be fully and dependably met. Additionally, IBM’s decision to operate Red Hat as a distinct business unit managed by the company’s current executive team is a wise move that should assure clients and partners that IBM’s and Red Hat’s dedication to customers’ freedom, choice and flexibility remains intact.

What about the two companies’ current focus areas and future goals? It’s arguable that despite the importance of RHEL to IBM, the deal’s value hinged on newer Red Hat technologies and services, particularly Red Hat’s OpenShift platform, OpenStack multicloud management solutions and expertise with Kubernetes container technologies. All align well with IBM’s focus on open-source hybrid multicloud services and solutions.

That last point—enhancing customer satisfaction—can’t be stressed too highly. Whenever IT markets undergo major transitions, including the shift to cloud computing that’s currently underway, ensuring that customers are comfortable with and agreeable to the changes they face is critically important. If vendors expose their clients to discomfort or damage the stability of critical processes and systems, they place their relationships and business with customers at serous, potentially fatal risk.

IBM clearly believes that Red Hat’s solutions, services and strategic partnerships will prove invaluable to businesses and other organizations transitioning to hybrid multicloud computing. The acquisition should ensure that customers and partners will embrace and benefit from Red Hat innovations and expertise.

In fact, those issues were emphasized this week when IBM and AT&T announced a new multiyear strategic alliance reportedly worth $1 billion. Under the agreement, AT&T will modernize its internal software applications with IBM’s help and infrastructure solutions, enabling migrations to IBM Cloud. Plus, AT&T will utilize Red Hat’s open-source platform to manage its workloads and applications. The improvements enabled by IBM and Red Hat will allow AT&T to better serve enterprise customers.

In other words, the Red Hat acquisition is already paying off substantially for IBM and its clients.

Does the IBM/Red Hat deal face any significant challenges? The size and scope of the deal makes that nearly certain, though those same factors also mean that executives in both organizations will be working hard to eliminate or minimize problems. On the upside, IBM and Red Hat’s long association and strategic partnership suggest that they’re technologically well-suited to one another. On the down, cultural issues are likely to be bigger headaches.

Most any company that’s been around for a quarter century has evolved a distinct corporate culture. Leadership stability can add to that substantially, and Red Hat’s Whitehurst has been CEO since 2007. Working and doing business in an organization of 13,000+ employees is considerably different from a 350,000+ employee global enterprise, like IBM.

Those points aside, acquiring Red Hat makes eminent sense in terms of IBM’s past, present and future. But it is that final point—the future of the company and its customers and partners—where IBM’s purchase of Red Hat is likely to shine clearest and brightest. An old IT industry bromide long suggested that “No one ever lost their job by recommending IBM.” That was true for decades in many enterprise data centers. With the acquisition of Red Hat, IBM is looking to ensure that it remains true as enterprises transition toward open-source, hybrid multicloud computing.