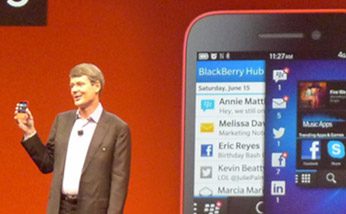 From all accounts, BlackBerry CEO Thorsten Heins is enjoying himself at this year’s BlackBerry Live. This should be no surprise, especially compared with last year when the then-new CEO found himself at a conference filled with questions, but no answers. Then we got to see a prototype of a new BlackBerry phone. This year, Heins announced his company’s third model in the new BlackBerry 10 line, the Q5.

And of course there’s more, not the least of which is BlackBerry’s return to profitability, the growth of the company’s BlackBerry World app market to more than 120,000 apps, and the decision to make the company’s instant messaging system, BlackBerry Messenger (BBM), available on iOS and Android.

So this seems to be a good year for BlackBerry, with lots of news, an increase in the number of subscribers and growing mind share. The company is obviously hoping to be seen as significantly more cool to a broad range of users and so is enlisting celebrity spokespeople such as Alicia Keys to help.

The question, however, is whether BlackBerry’s good year will be good enough.

On May 14, Gartner research analyst Anshul Gupta announced that Android handsets now comprise nearly 75 percent of all devices. Apple, meanwhile, has dropped to slightly more than 18 percent. And BlackBerry has sunk to the single digits. If BlackBerry plans to claw its way closer to the top, then the company needs to appear more relevant to consumers and business users than it has recently.

To accomplish this, BlackBerry released its touch-screen Z10 in March and announced that its app store had reached 100,000 apps. The new BlackBerry device includes a broad selection of entertainment options and games designed to appeal to younger users. Now the company is positioning its ecosystem to be as attractive as possible to developers—and it is claiming that a third of its developers consider BlackBerry their primary development target.

The problem with the Z10 is that it doesn’t do much to retain the BlackBerry faithful, many of whom really like having a keyboard. Thus the recently introduced Q10, which U.S. carriers will have in June, and the Q5 that Heins introduced at BlackBerry Live.

But new phones are only part of the equation. BlackBerry also needs to raise its visibility, and it needs to reach beyond the relatively affluent who buy high-end smartphones.

BlackBerry Hopes for Reversal of Fortune at BlackBerry Live

To that end, the Q5 will be sold first in Africa, Asia, Latin America, the Middle East and some parts of Europe, and will be focused on the mid tier, meaning that it will be less expensive than current BlackBerry devices. BlackBerry already sells large numbers of older designs in these regions, and the Q5 gives the company a BlackBerry 10 device that is more affordable for people in these markets. Notably, the BlackBerry Q5 will be offered in a range of colors, joining a recent trend in mobile devices.

The part about raising visibility is a little harder than just offering a cheaper phone, however. To accomplish this, the company needed to find a way to get the attention of the non-BlackBerry-using population. After all, if they don’t think about BlackBerry, they won’t buy a BlackBerry. This is likely the rationale behind the growth of BBM outside of the limits to BlackBerry World.

BBM is one of those apps that can be described as world-changing. It’s the app that caused oppressive governments in the Middle East and South Asia to look for ways to ban the BlackBerry completely. The reason? It was being used to coordinate the unrest that accompanied the Arab Spring and other pro-democracy movements in many parts of the world. The reason so many governments fear BBM is because of its uncrackable encryption.

With BBM available on the iOS and Android platforms, BlackBerry gets a number of benefits. First, it raises the awareness of BlackBerry because more people will be using it, and you can bet that the app will clearly be a BlackBerry product. Second, it helps take the heat off of BlackBerry because its devices won’t be the only ones out there with such security—it will be available everywhere, and few governments will be able to find a way to ban virtually all smartphones.

BlackBerry’s equally secure PIN messaging, in which any BlackBerry device can send an encrypted email-like message to another BlackBerry device using only the device’s personal identification number, won’t be included. The company keeps an important feature to itself, while deflecting any attempt to restrict BlackBerry.

The BBM Channels, a targeted social networking app that works with BBM, adds something to the offerings that may help encourage users to start using BBM. BlackBerry is setting up channels for celebrities, sports teams and the like.

The whole idea is to spread the BlackBerry word beyond the current user base. If it succeeds and the company’s mind share grows, BlackBerry gains in visibility. Over the long term, this means that the company won’t be seen as just the phone for government workers, banks and corporate users, but also as a way for everyone to have fun, and to do it securely. By taking the longer view, BlackBerry may have found a way to grow again.