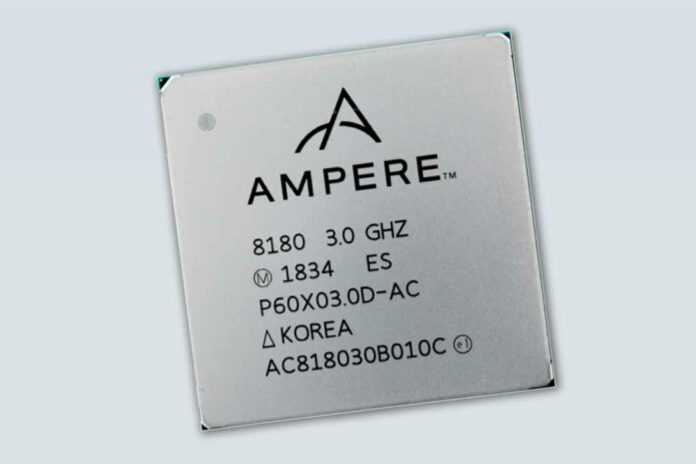 A startup run by a former Intel president is rolling out the first of its Arm-based server processors that are designed to challenge its larger rival in such modern environments as hyperscale data centers and edge computing.

Ampere, which officially launched in February with ex-Intel executive Renee James as its CEO and chairman, on Sept. 18 unveiled the first of its eMAG processors leveraging Arm’s Armv8-A 64-bit architecture and focusing on both performance and power efficiency to address private and public cloud environments and new workloads like big data, in-memory databases and applications using artificial intelligence technologies.

Officials with the company, which is backed by venture capital firm The Carlyle Group, also said Lenovo and several original design manufacturers (ODMs) are adopting the 16-nanometer eMAG processors for selected systems. They also are introducing a roadmap that includes 7nm processors with multi- and single-socket variations, which will be available next year.

“We have made tremendous progress since our launch eight months ago, continuing to execute on our first and second generation products,” James said in a statement. “More importantly, we are ahead of schedule on building out a robust, multi-product roadmap that meets the performance and features demanded by the cloud computing ecosystem.”

Intel controls more than 95 percent of the server chip market and has been the dominant player in the space for well over a decade. However, the company has seen the number of challengers grow in recent years as trends like the cloud, the internet of things (IoT), edge computing, the proliferation of mobile devices and the massive growth of data have expanded. Among those looking to chip away at Intel’s market share are traditional rivals like Advanced Micro Devices, with its Epyc chips based on the company’s Zen microarchitecture, and IBM and its Power technology, as well as the OpenPower efforts.

At the same time, Arm and some of its chip-making partners have looked to leverage the performance and power efficiency found in the architecture—Arm designs are the basis for the bulk of chips that power smartphones, tablets and other mobile devices—to drive servers for such environments as the cloud, the network edge and the IoT. The initiative has seen some hits and misses. Cavium, which is now part of Marvell Technology, has created the ThunderX2 data center systems-on-a-chip (SoCs), but the effort also saw a significant player in Qualcomm pull back on its server plans.

Ampere officials are hoping their eMAG chips will give the company traction in the expanding server space.

“We are partnering with world-class OEMs like Lenovo and several ODMs to address the unique design requirements for our cloud customers and meet their total cost and performance targets,” James said.

Patrick Moorhead, principal analyst with Moor Insights and Strategy, has been skeptical of new Arm-based server chip makers, given what’s happened in the past, including the demise of pioneer Calxeda and Applied Micro. At the time of Ampere’s launch earlier this year, Moorhead also noted that the company was basing its chips on Applied Micro’s mature X-Gene products and that it was hiring experienced chip designers and developers.

Since then, the playing field has changed, creating a more inviting environment for Ampere, Moorhead told eWEEK. He pointed to not only Qualcomm shrinking its focus for its Centriq chip to carriers and edge computing environments, but also to Intel putting off its 10nm processors to 2020.

“This gives another reason for OEMs and hyperscalers [like Google, Facebook and Microsoft] to look at alternate suppliers,” the analyst said. “I am more positive on it because of Intel’s missteps and Qualcomm narrowing its scope.”

Still, Ampere is a small company with limited resources, but it continues to acquire talent, including a lot of the Qualcomm engineers who worked on Centriq. Moorhead also was impressed by how quickly Ampere has gotten its first products on the market, having expected those not to arrive for another six months. However, “there’s “still a lot to prove there,” he said.

Moorhead still wants to see end users saying they will use Ampere chips. However, the 16nm products released this week are probably being used to help drive revenues and get them company into the market. The arrival of the 7nm products next year should generate more interest among companies.

The first two eMAG chips, manufactured by Taiwan Semiconductor Manufacturing (TSMC) in its 16nm FinFET process, will have 16 and 32 cores. The 32-core version will sell for $850 and include eight DDR4-2776 memory controllers and 42 lanes of PCIe 3.0 for I/O, with a 125-watt thermal design point for high power efficiency.

The 16-core version will sell for $550. Both versions, which are shipping immediately, will run up to 3.3GHz.